With its vineyards, glowing pastures with sheep, glaciers and fields of lupin, New Zealand is a peaceful, bare and, accepting country. 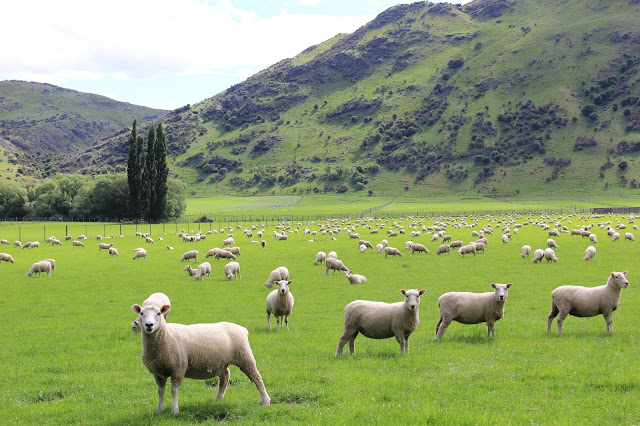 A bridge of colors
arches over the green fields
where sun and rain meet
Haiku, Belisa


Malborough Region
We took a small plane from Auckland to Blenheim in the in the region of Marlborough. Late afternoon, at the Taylor Reserve we walked with a background of suspended cottons along with the baaing of sheep coming from the approaching hills. Days are long and the weather is pleasant in spring in November.
Wrestles fantails, California quails, a gold finch and a kingfisher had made this trail home.
Malborough Region at the tip of the south island is known for its vineyards. The small town of Blenheim is a good place to stay and enjoy the vineyards’ well-tended orderly beauty.


On the way from Bleinheim to Havelock glowing farms and hills with dark green shadows were inviting. Havelock is known for its green lipped mussels which we had an opportunity to taste later in Akaroa in Banks Peninsula. They were scrumptious. 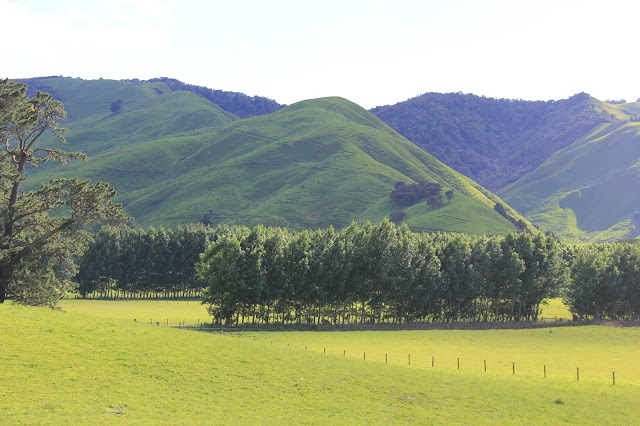 We hiked a section of the Queen Charlotte Track a 70 km trail starting in Anakiwa. It is a pleasant track, shady under the umbrella looking fern plants home to kingfishers, and king shags. Beneath the sharp cliffs on a sunken tree in the green waters were a small shark and a ray. At the end of 3 km, a single black swan was gracefully swimming at Davies Bay. 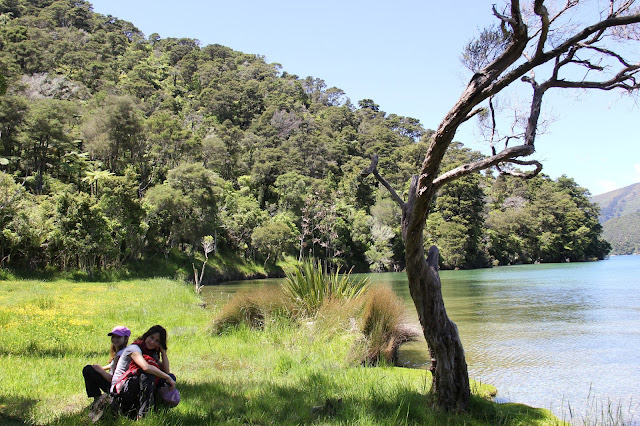 We stayed in the small town of Picton before taking a plane to Christchurch from Nelson. After a leisurely lunch at a café with live African jazz, we hiked the Bob’s Bay track along with scents of pink and yellow flowers hanging to the cliffs above the emerald colored sea. New Zealand pigeons are graceful and motionless when they are perched on trees.  At the end point after 2 km, a small beach with tide pools brought the child of my past. Conches and mussels found their way to our pockets to be observed later at the dinner table at Picton with fish and chips.

On the way to Akaroa from Queenstown is the Hilltop Tavern with spectacular views of the Bays Peninsula, a great place to have a heart-warming pot of tea.

Banks Peninsula is a circular half island. The main town, Akaroa has French named streets and historical houses and a tiny movie theater. At the east end is the Lighthouse Road that takes you up to Misty Peaks Track where the trail glows with yellow bushes with scents of melon.

The next day we took a boat trip. Hector dolphins followed the boat in the plankton filled waters of the French bay off of Akaroa. Spotted cormorant, pied cormorant, shags and terns were plentiful. Little blue penguins and seals were a delight to observe.


With the lambing season just being over in the Pigeon Bay Reserve on the north east side of the peninsula, the lambs were well-fed and timid. The emerald ocean mingles with the green hills speckled with macrocarpo trees bent with the intense wind of open lands. It was a day to remember for all of us.

Purple peak trail starts with a beautiful lake where we spotted a paradise shelduck. The trail offers views of Akaroa far below. Hares run all over. 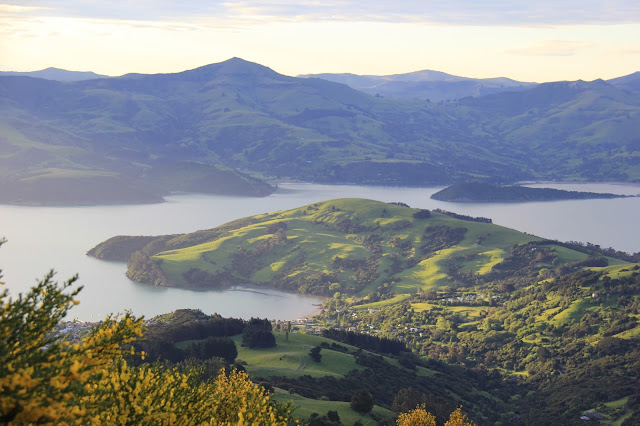 The cool hills of the Bays Peninsula are replaced by the arid flatness and the remote gaze of snow-capped mountains in the Mackenzie region. After a simple lunch with at the Mt John observatory’s café we hiked on the Peninsula track which was inhabited by playful rabbits. The red low plants covering the sun exposed hills contrasted the turquoise coldness of the glacier Lake Tekapo. 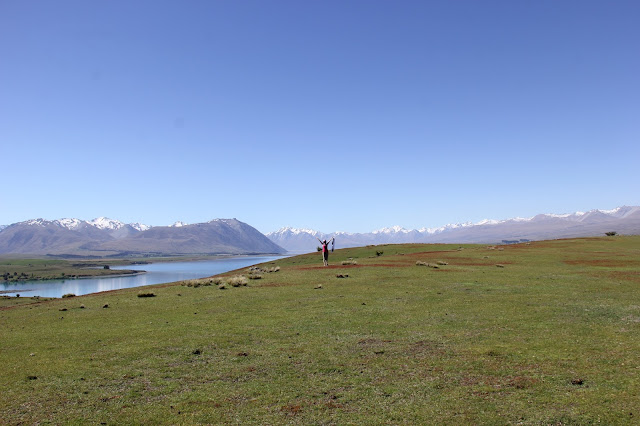 Lake Pukaki offered stunning views of Mt Cook which was taken back the next day with the clouds hiding the majestic peak. 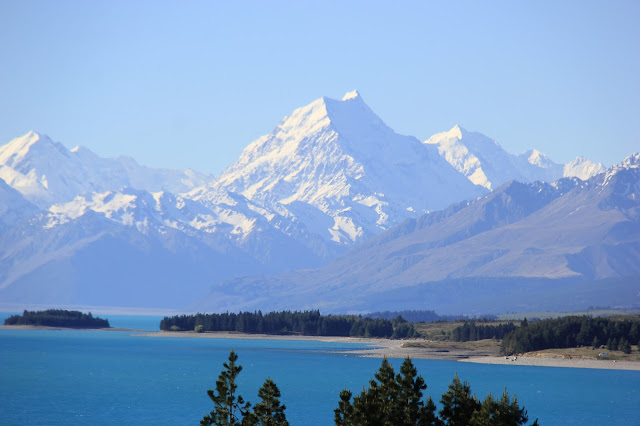 We took what nature had to offer and hiked the Hooker Track using our imagination of Mt Cook. The trail was pleasant with water falls contrasting the black mountains and Mt Cook buttercups. The winds were strong enough to blow your heart away especially on the three swing bridges. At the end of the trail is the Hooker Lake a meltdown of the glacier. 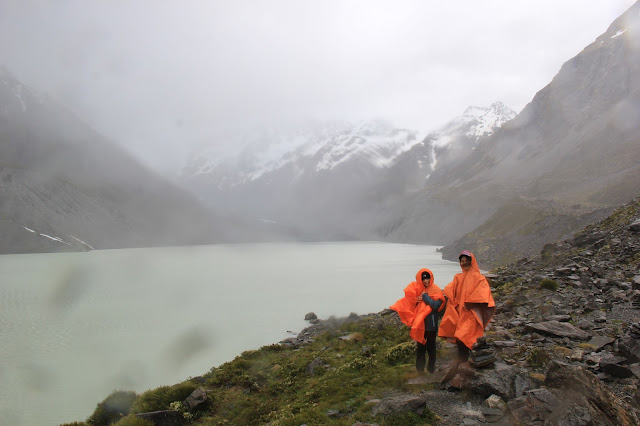 The Tasman Glacier, a mesmerizing dream pulls you in with its grey blue waters and icebergs looking like ancient ships. I tried to block all my senses in order to absorb its beauty. The sunken truth of not doing enough to protect the world reappeared. A pair of loud paradise shelducks flew into the glacier valley that used to feed the green lakes once blue with the glacier melt before 1890’s. Its level decreased about 150 m since then. In length, about 600 m of the remaining 24 km disappears quietly every year. 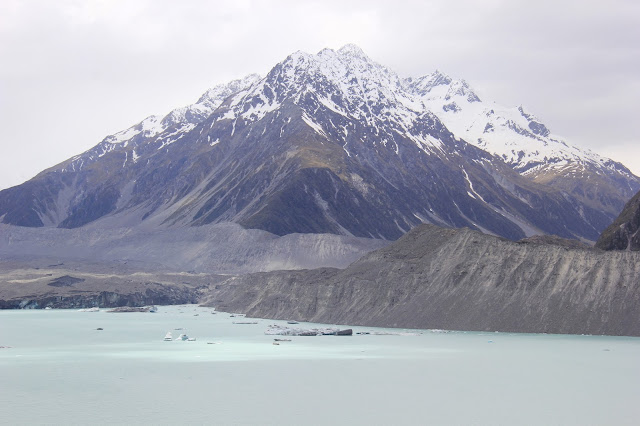 Queenstown
Queenstown is a pretty town by the beautiful lake of Wakatepe. The bakery, icecream and burger shops run by the Ferg Bakery since 1863 have been the city's signatures. 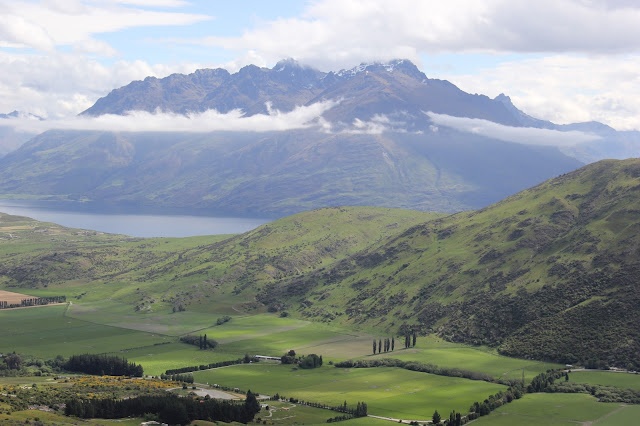 In the Skeepers Canyon, through the awakening mist were rocks embraced by soft green.  The road was built in nine years by carving the rocky cliffs using the tax money collected from the gold miners during 1870’s.  We took a boat ride on the narrow Skeepers river. The boat driver did not hesitate to show his skills for making 360 turns while getting hair close to the sheer rocks. 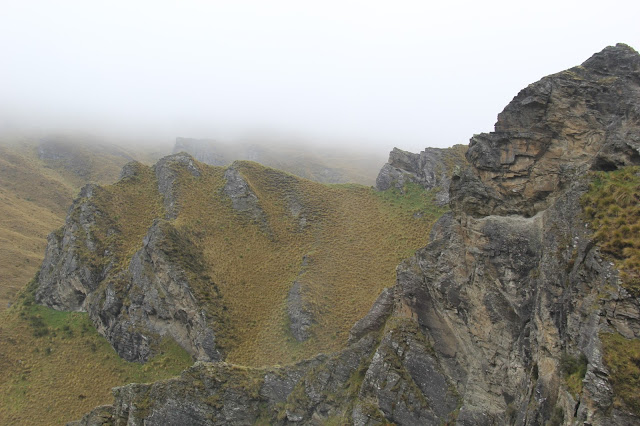 Fiordland – Milford Sound
We stayed in a historical Bed and Breakfast owned by a 3rd generation friendly New Zealander in Manapouri. On the way to Milford Sound from Manapouri, temporary waterfalls under the heavy mist of a continuous rain were mind blowing. 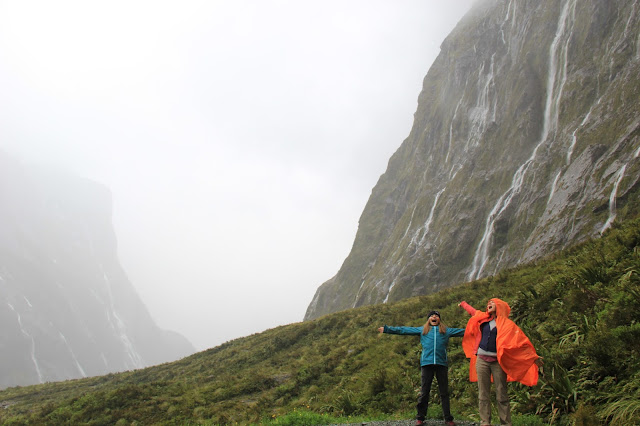 Milford Sound is a passage of ice-carved rocks and black waters like the Earthsea in Ursula K. Le Guin’s novels. 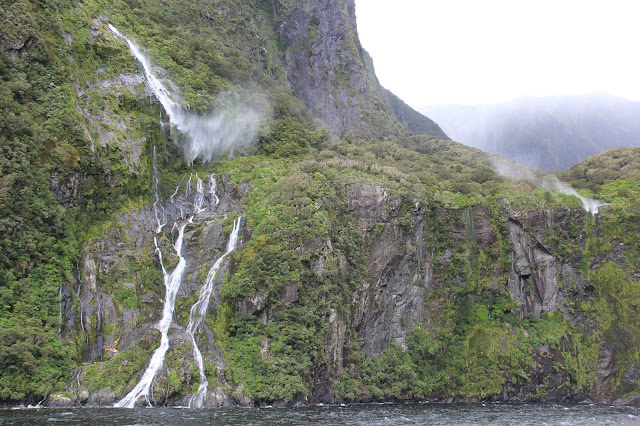 We chose an old sail boat for our 2 hour journey up to the Tasman Sea through the sound. Strings of water were embellishing the rocks, some did not make it to their bases because of the strong winds. We saw seals and fiordland crescted penguins in calm bays. 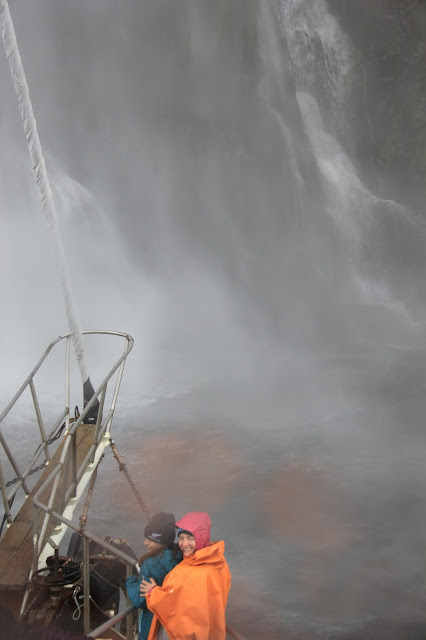 On the way back there were a few lovely lookouts and tracks we stopped at. A kea greeted us at the parking lot of “the Chasm” path. 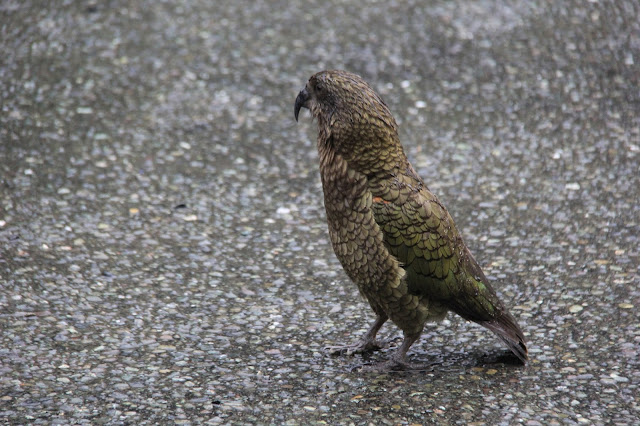 We walked through a rain forest which looked like it never had a rainless day. The Chasm is the name of the rocks sculptured by pebbles and water from the Cleddau River and reminded me of the Oracle who used to sit on a tripod so as not to fall into a chasm in ancient Greece. 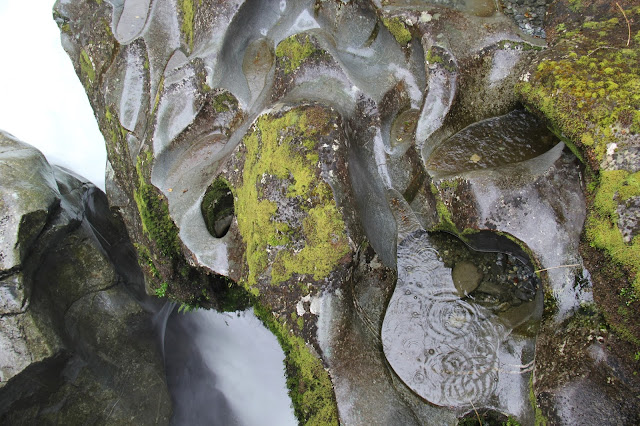 Another stop on the road we enjoyed was the Monkey Creek, which were said to offer immortality to the ones who drank its water. 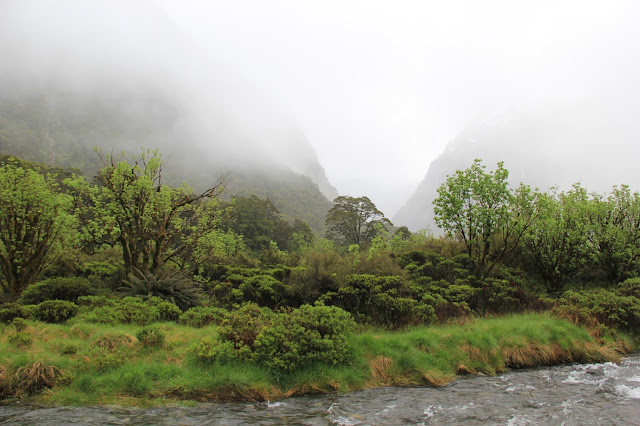 Auckland
Many islands can be visited from Auckland by ferries. Rangototo
is one of them which was formed by a volcanic eruption during 1300’s and is covered by black lava rock. We walked to the summit through crumbly lava called aa. Kidney fern is one of the plants that adapted to arid conditions by reducing its surface area to save water by crumbling itself like potato chips. Pohutukawa and northern rata trees were home to many birds such as northern tomtits, tuis, black birds and riflemans. 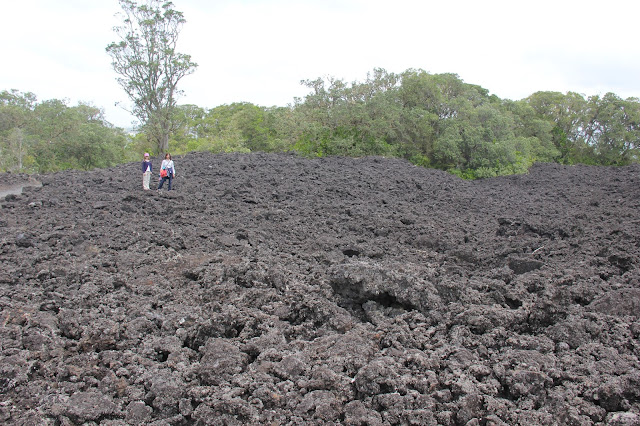