We only had 24 hours to see the Hanseatic town of Tallinn in Estonia.

This magnificent medieval city on the Baltic sea, feels like “Autumn in August”. It was conquered first by Danes in 1219 then by Germans in 1230 and only gained independence in 1991.

What makes the city architecturally interesting is that it is built in two sections.  With the arrival of German merchants the city was divided into the Upper and Lower Towns which are connected with “short” and “long” legs.


I find inspirations every time I travel. Please visit my web site to learn about my art. 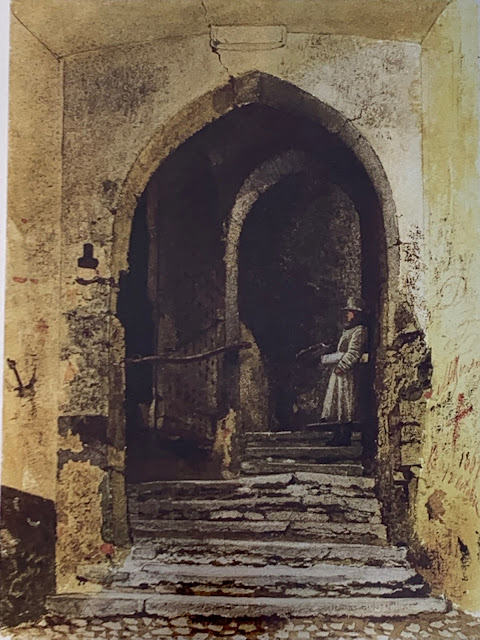 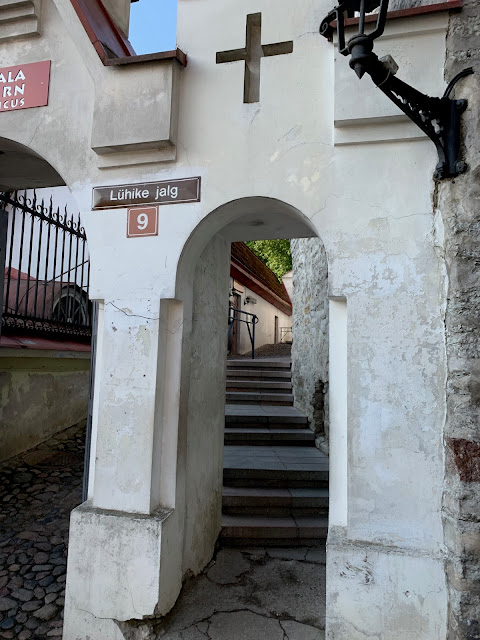 Oak and linden trees shade the squares of the Upper Town, known as Toompea. This “Town of Nobility” is home to elegant government buildings, such as the seat of the Parliament and the Tall Hermann Tower lining the curving cobblestone streets. 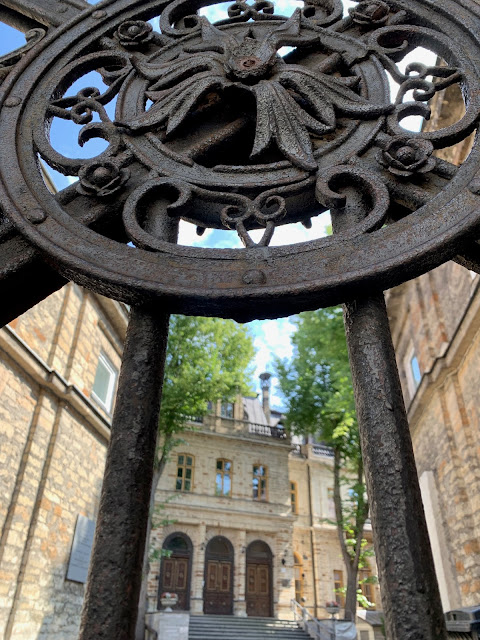 From the viewing platforms visited by pigeons along with tourist groups, red rooftops of the town below are seen. The red color is a remnant of the past and is still enforced for new roofs. 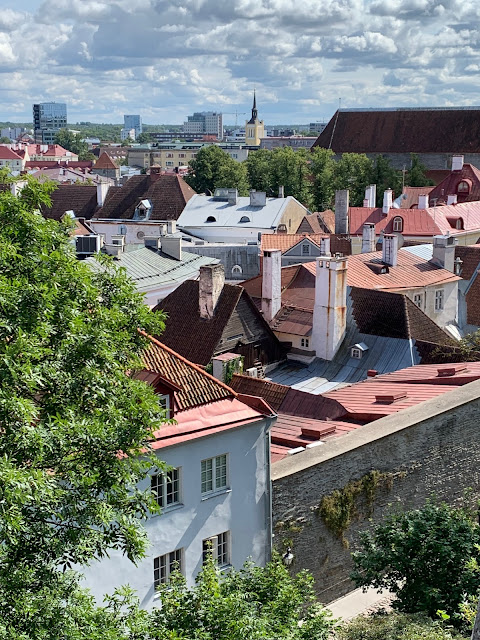 Wind vanes in shapes of golden birds and sail ships are in perpetual motion above the roofs. 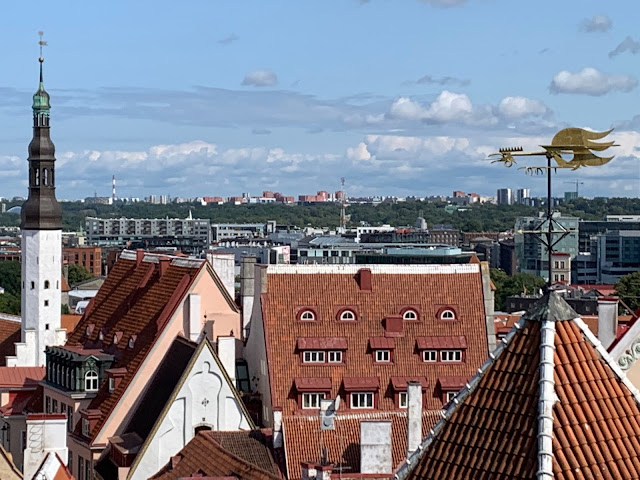 Estonia was one of the countries in Russia which had gone through the common Russification, a cultural assimilation process during which they had to give up their culture and language. An immense Russian church Alexander Nevsky Cathedral built in early 19th century was to be demolished in 1924 to rid Tallinn of Russification. Luckily this plan was never carried out and now it reaches the skies. 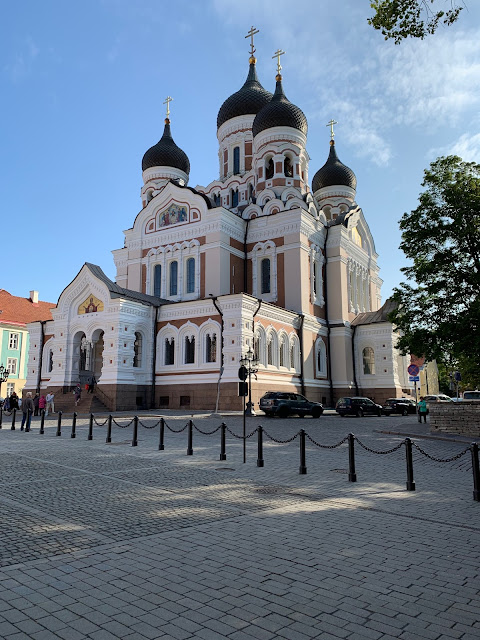 The oldest church in town is the Cathedral of St Mary the Virgin, built in 13th century by Danes. We admired the simple beauty of the Gothic church slowly walking around it. Inside coats of arms were on display. 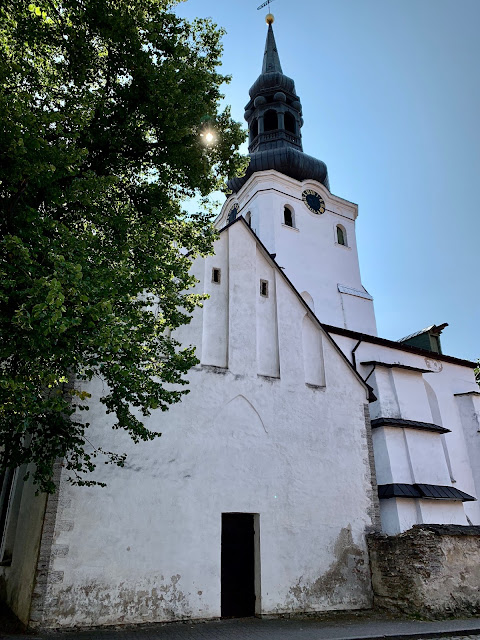 The curving road of the “long leg” connects the harbor and the Toompea Hill. It was built during the 14th century for riders and horse-drawn carts. 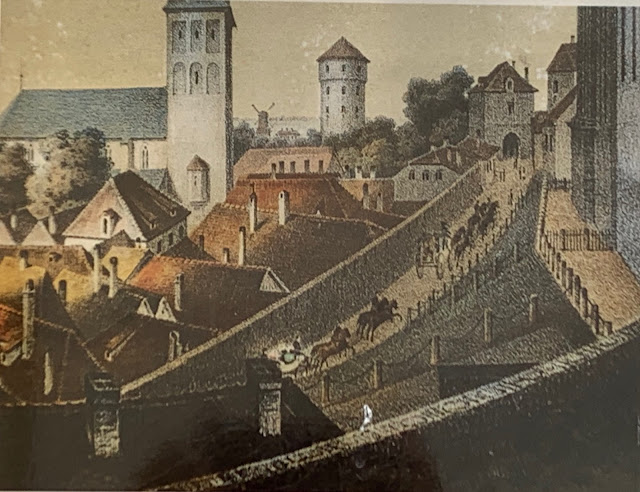 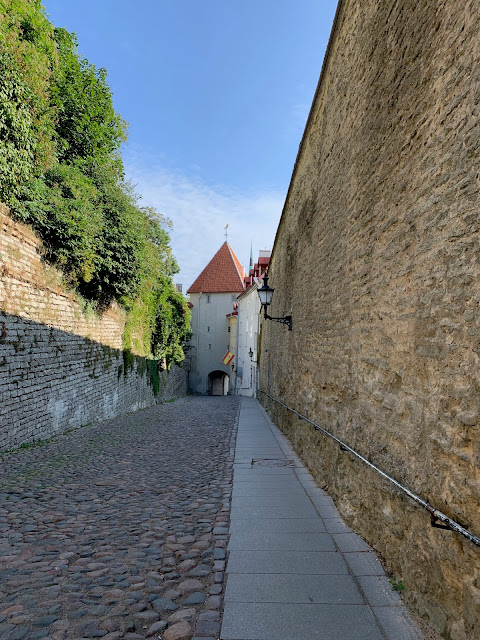 The city below is designed around the Town Hall Square surrounded by medieval buildings.  It is the center of the Lower Town since the 13th century. 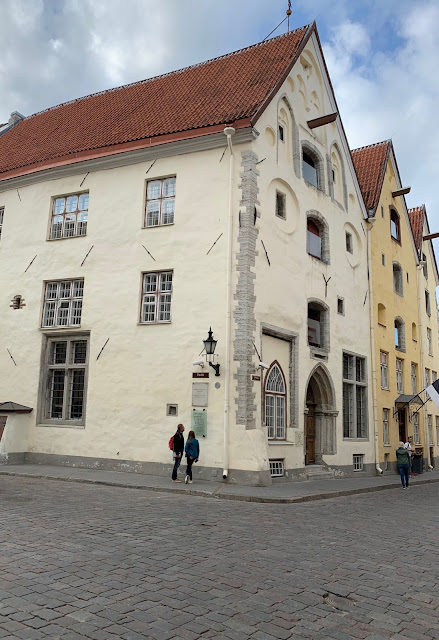 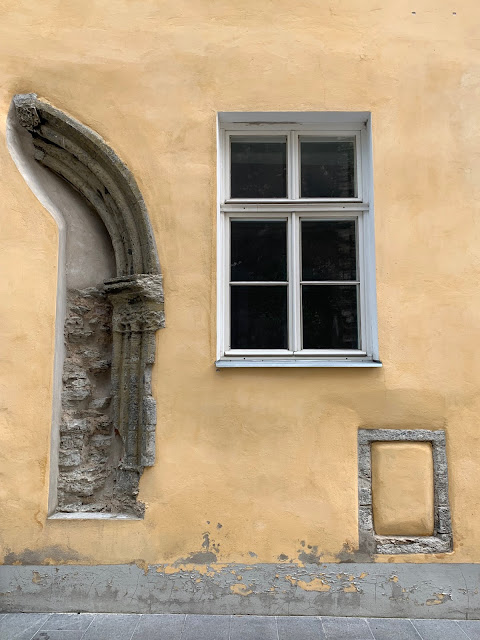 It is a delight to walk the small side streets that meet at the square at some point. 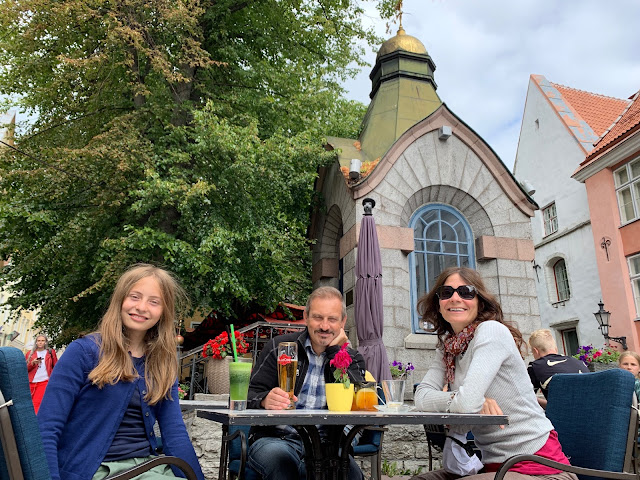 On one these streets is the "House of Blackheads". The Brotherhood of Blackheads was a guild for unmarried merchants and ship owners. This opulent 15th century Renaissance building was their meeting place. There are also buildings for confectioners making chocolate and marzipan, blacksmiths, goldsmiths, merchants and bookbinders. 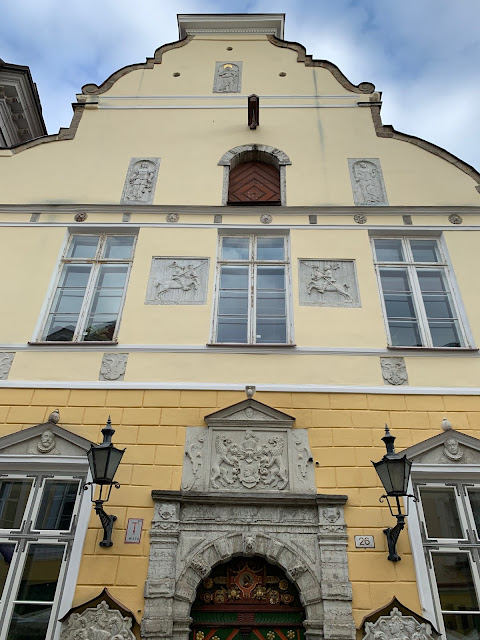 In the late afternoon music by street performers fill the lower town. The area around the Holy Spirit Church with a large green clock and stepped gable is one such point where musicians or tour guides in medieval clothes appear and disappear.

Massive tombstones were on display along the walls of the narrow alleyway next to the Church of the Saint Catherine of Alexandria. Now by the side of this church which belongs to the members of the Brotherhood of Blackheads and Great Guild of Hanseatic merchants are cozy pizza restaurants. 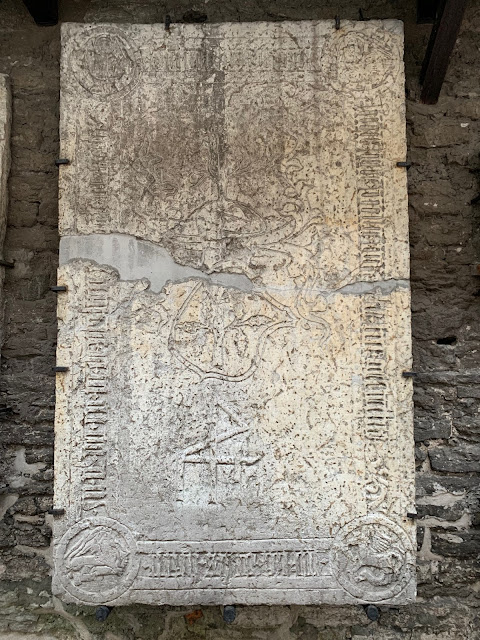 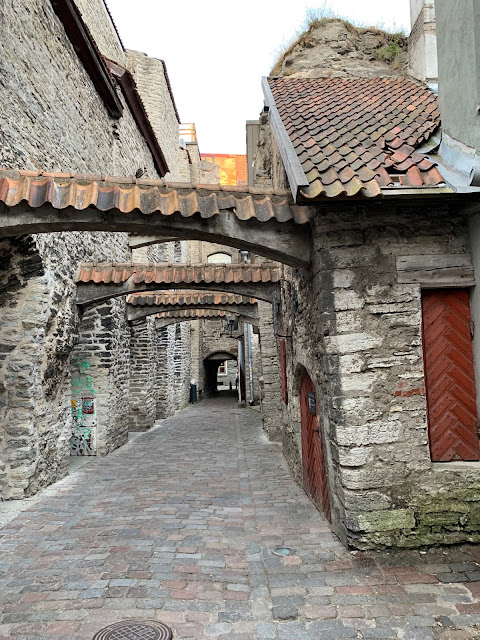 Across from the 800 year old pink building where we stayed was the Niguliste church, which houses an impressive collection of religious artworks. Dance Macabre by the German artist Bernt Notke depicts the universality of death. It functions as a memento mori, the admonition that all must die.  On the only remaining fragment of the original 30m painting is the dance of death with the pope and the nobles. The section with the dance of death with peasants, fools, or infants disappeared.

Most of the other artworks at the Niguliste Museum show the lifestyles of the elite since it was popular to depict luxurious objects in art to gain prestige in the community. The ideals of poverty and simplicity however remained valid among the followers of the Christ and many buried their deceased naked without any possessions. “Dance Macabre” addresses the insignificance of material possessions. 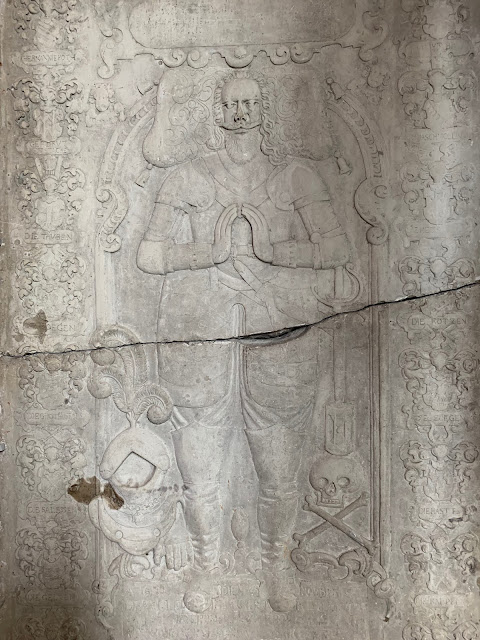 During the last few hours of our time in Tallinn, we visited the Kadriorg palace. At the end of the 18th century, Tsar Peter I ordered its construction for his beloved wife Catherine. Set in front of a dark forest, and surrounded by luxurious gardens, the Palace now is a museum for European paintings. The painting of Friedrich the Magnanimous by Lucas Cranach the Elder’s workshop in the German room was my favorite among all. 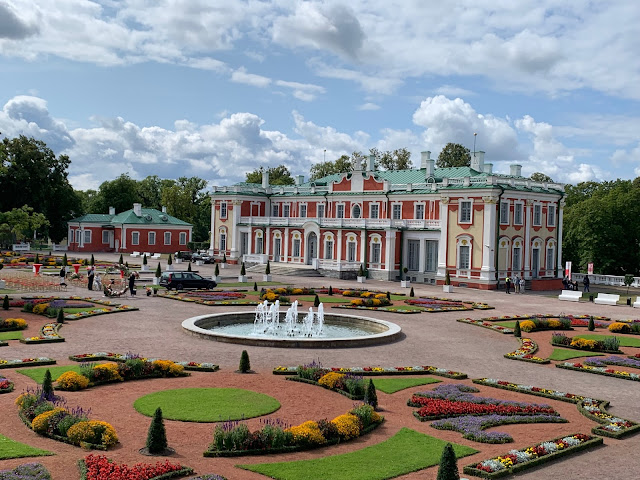 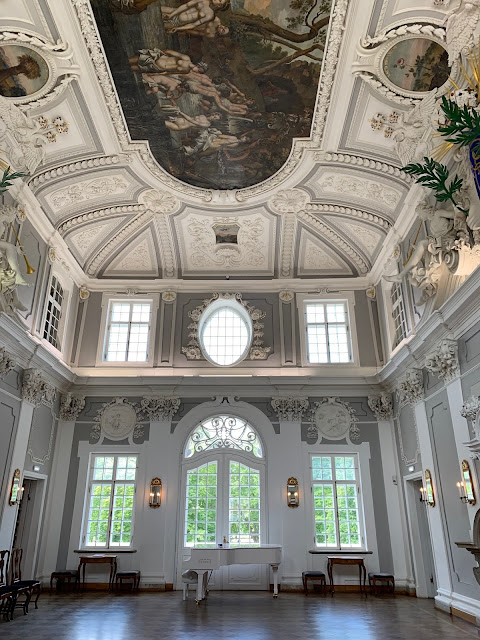 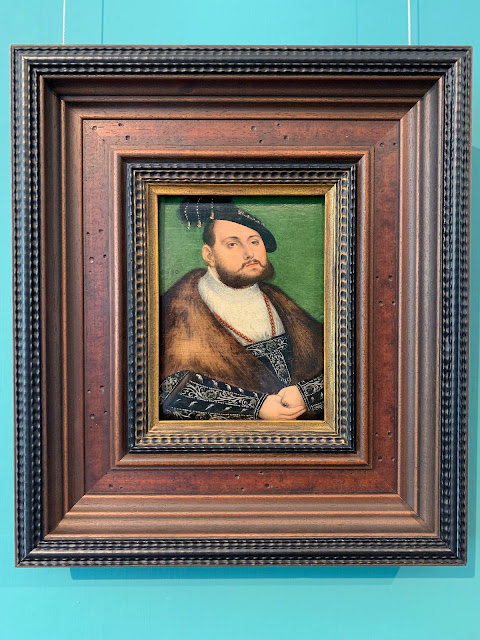 As the big finale of our trip, we enjoyed coffee and a slice of gooseberry cake at the oldest café in Tallinn, Maiasmokk. Since 1864, a turning teacup cartwheel decorates its windows. 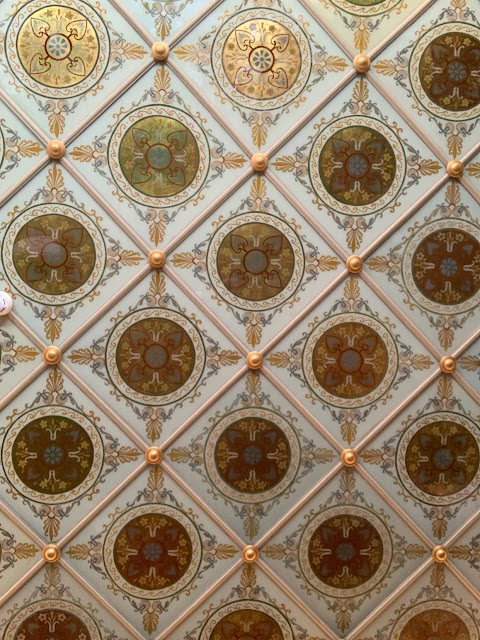