STORIES BEHIND THE CHÂTEAUS OF LOIRE.. THE SLEEPY PROVENCE AND CÔTE D'AZUR, 2017

The autumn was growing into winter when we traveled through Southern France with my husband, daughter and both our mothers in late November. First, we visited a couple enchanted castles in the Loire Valley. On the third day we took the afternoon train to Provence. During the next two days, we drove through small towns and beautiful vineyards.  Côte d’Azur was our last destination. All the towns we passed through seemed to be sleepy; St Tropez, Roquebrune-Cap-Martin, La Tourbie, Monte Carlo, Nice, Éze, Villefranche-sur-Mer and St Paul de Vence. Before returning home, we spent one more night in Brussels with my husband and daughter and myself reminiscing an earlier Christmas.

The hotel we stayed in for two nights, Domaine De La Tortinière, was overlooking a green valley in Montbazon near Tours. In the morning our first stop was the stunning Château de Chambord in the Loire valley built by King Francis I. With its many chimneys, cupolas, gables and towers, it definitely had a royal character as noted by Henry James. It was built as a hunting lodge at the beginning of the 16th century on a vast land near a forest and a game resort. It took 28 years to complete it. In the cold of November, it was hard to imagine the bare rooms with high ceilings warm, even with burning fireplaces. 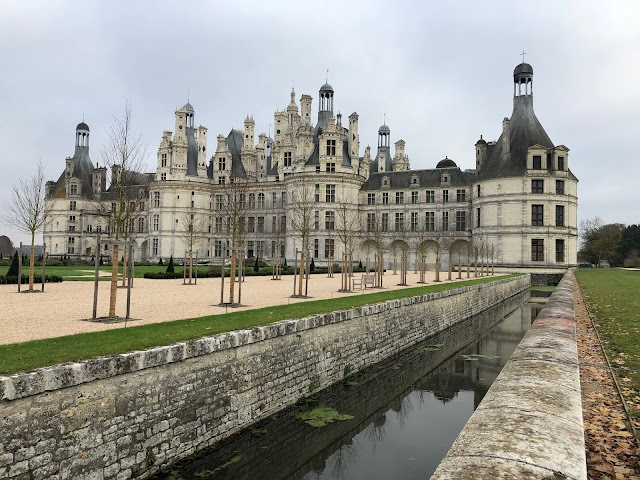 From the terraces circling the castle, gardens shaped in arabesque figures and orchards were seen. 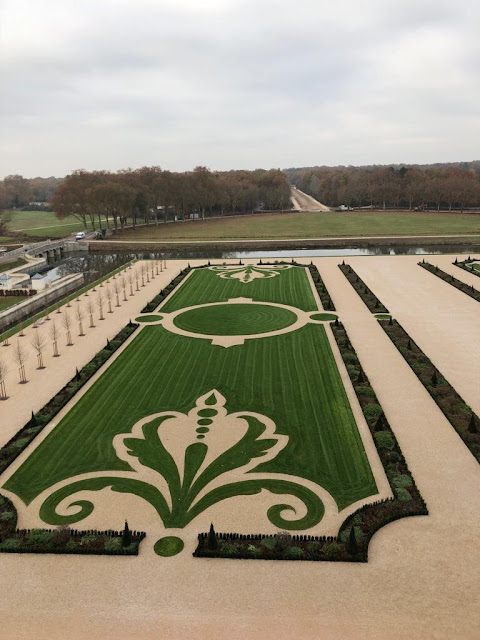 The next stop was Château de Chenonceau by the River Cher near the small village of  Chenonceau. Stories of many royal women were engraved in its walls. 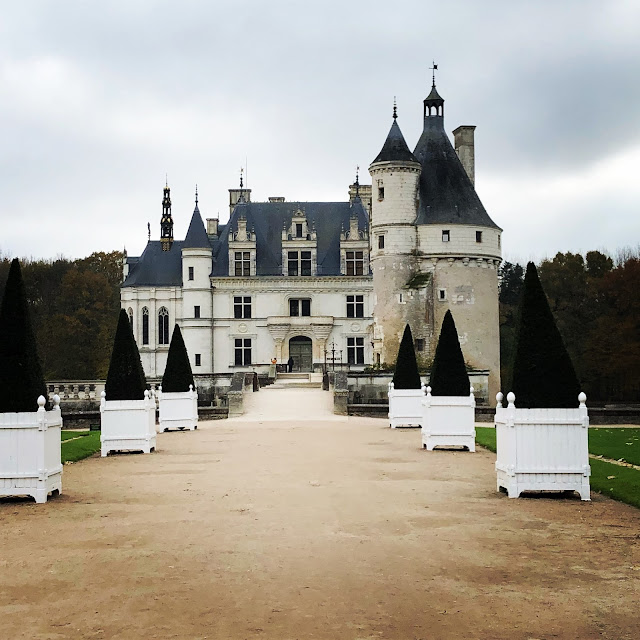 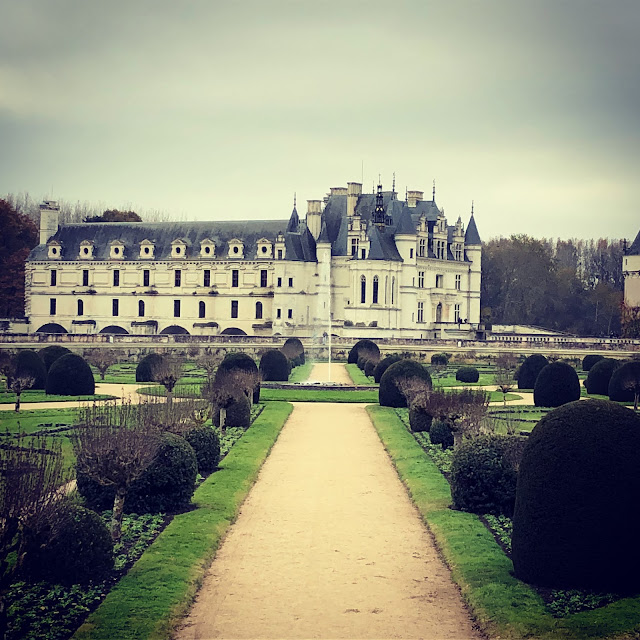 In 1547, Diane de Poitiers, praised as "la belle des belles" received the chateau as a gift from Henry II. He was in love with Madame De Poitiers with whom he met when he was 7 and she was 27. The secret beneath her "skin of great whiteness" was the cause for her slow death. She drank an elixir of gold chloride and diethyl ether during most of her adult life.

Catherine de Medici must have felt miserable when he had to visit the chateau of Diane, her husband’s favorite. When Henry II died she took over the chateau at once. She enlarged the mulberry plantations Madame De Poitiers established and added an aviary for rare birds and a library. She also introduced the "cuffs" into France.

My daughter enjoyed dancing in the extended ballroom she constructed on the bridge built by Madame De Poitiers. Ponte Vecchio in her own town Florence must have been an inspiration.

I imagined these ladies strolling around the gardens surrounded by a forest, loathing each other while sweeping the grounds with the grandeur of their rich layers of fabric. A secret D that belongs to Diane appears in between the H and the C of Henry and Catherine on the insignia Henry created in order to mark his contributions to France. 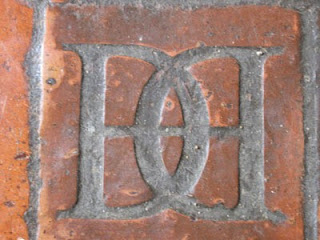 We had our afternoon tea at Amboise where delicious pastries were served by French ladies with white aprons. Across from the River Loire from the island of L’Île d’Or, the royal Château at Amboise was looking like it belonged to a children’s tale. 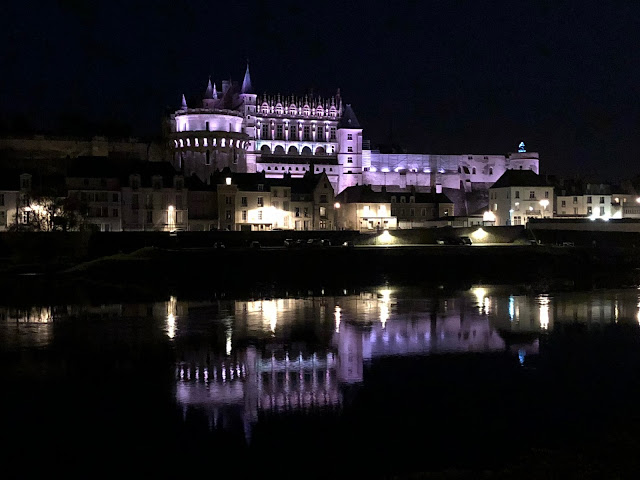 In the early morning hours, we left our hotel and drove through sleepy towns in fog. Even the farms had the colors of dawn. We stopped in Saché for a short break. Balzac’s handsome chateau which he used as a writing retreat was not open yet. 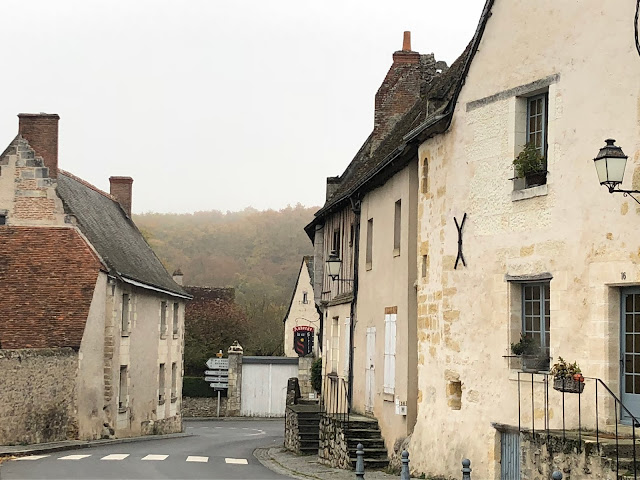 Further to the north of the river Indre, built in early 15th century, Château d’Azay-le Rideau is an elegant example of French Renaissance with white tufa walls, horizontal moundings and an astounding symmetry. 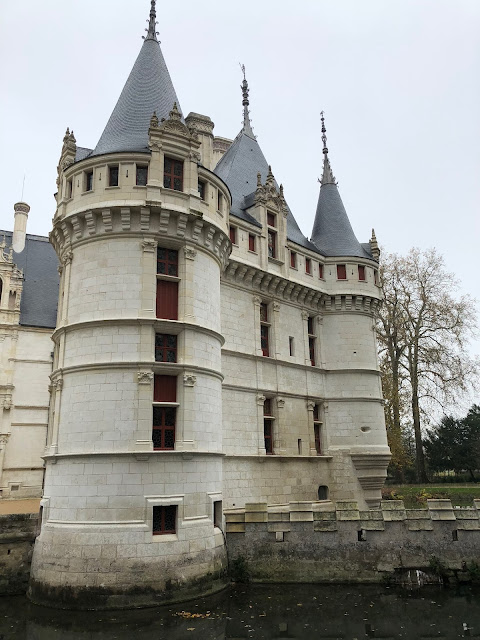 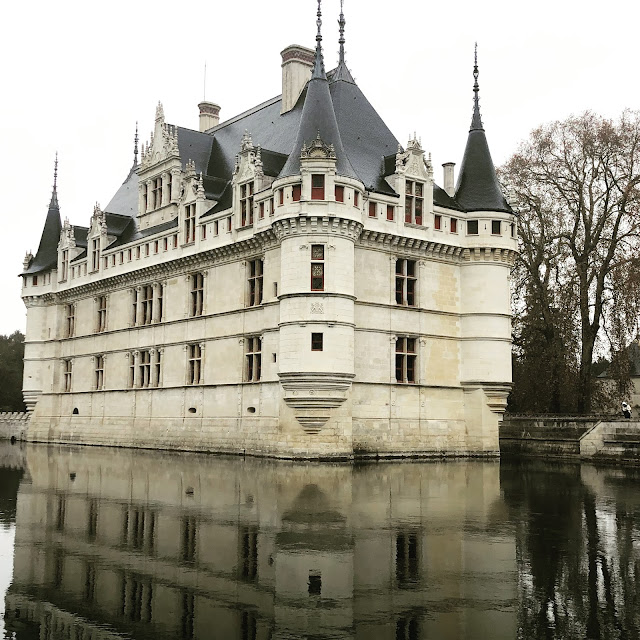 Its dark rooms were inviting with organza sofas, dim reading lights and the intent gazes of the kings and queens from the walls. Through frosty windows one could see the river around the castle dipped with hanging trees in tones of autumn. 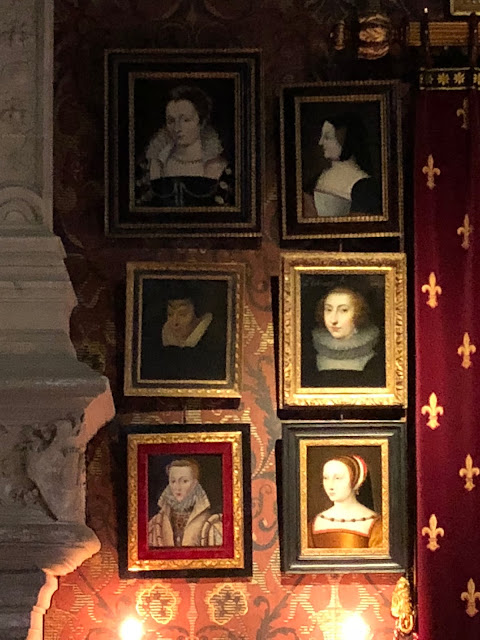 By the Vienne River, in the town of Chinon is the Château de Chinon, gazing down to the gray roofs of the Medieval town below. 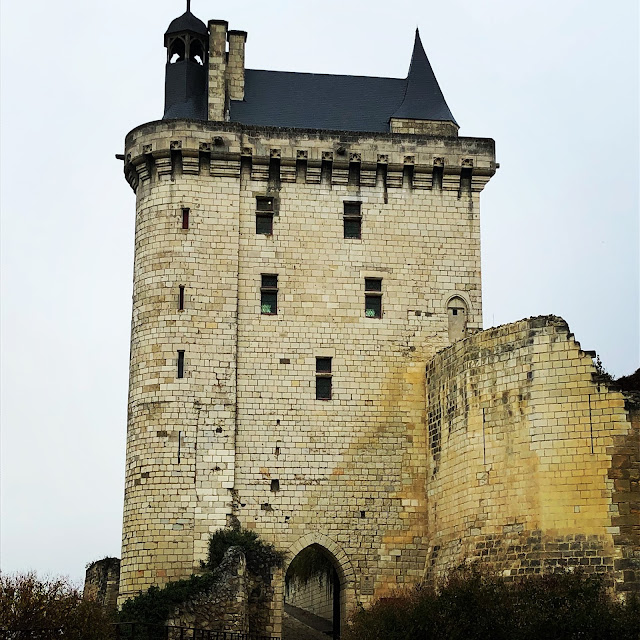 A flea market selling antique china, books, fur coats and statues was lining the riverside. I purchased a small fabric print of two 16th century women from a lady from out of Chinon with a bargain price of €5.

Wherever I go, I am drawn to flea markets selling pieces with memories of previous lifes. I found this a story from the book "Flea Markets in Europe" published by Chartwell Books about the origins of the flea markets.

"In the time of Emperor Napoleon III, the imperial architect Haussmann made plans for the broad, straight boulevards with rows of square houses in the center of Paris, along which army divisions could march with much pompous noise. The plans forced many dealers in second-hand goods to flee their old dwellings; the alleys and slums were demolished. These dislodged merchants were, however, allowed to continue selling their wares undisturbed right in the north of Paris, just outside of the former fort, in front of the gate Porte de Clignancourt. The first stalls were erected in about 1860. The gathering together of all these exiles from the slums of Paris was soon given the name "Marche aux Puces", meaning "flee market"." 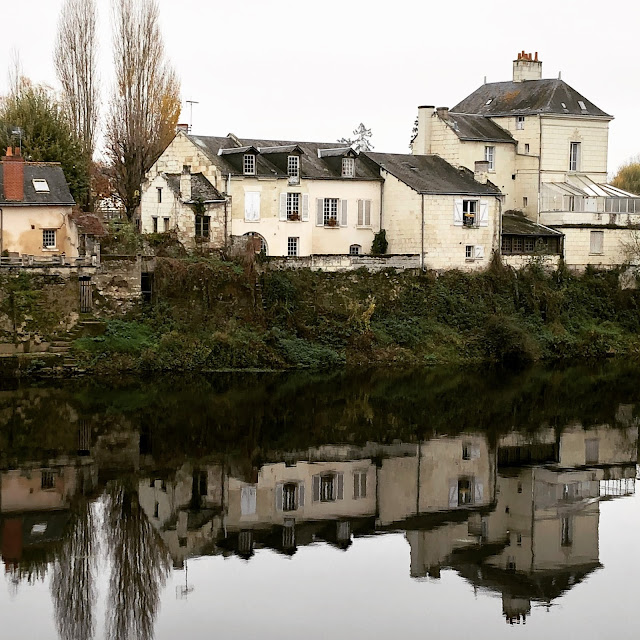 The five hours on the train from Saumur to Avignon was comfortable in large cushioned chairs. We were now in Provence. We stayed in Maison d’Hôtes Au cœur in Avignon with rooms large enough to barely fit our suitcases. The owner's kindness however overshadowed this minor problem. Avignon, as we discovered the next morning, was desolate since most places were closed on Mondays.

Papal Palais, which was the seat of Western Christianity during the 14th century is a massive medieval Gothic building. It was built in two phases with two distinct segments, known as the Palais Vieux (Old Palace) and Palais Neuf (New Palace).


The temporary exhibition, "Les Éclaireurs" - the Enlighteners has transformed the previously extravagant rooms that are now empty into an ethereal place. The sculptures and the textile installations were themselves transformations of ordinary every-day objects. I would love to display my own installations in the medieval setting of this stone palace some day.

Towards the evening we walked to the Doms garden above the city and looked down at the the Pont Saint-Bénézet bridge on the Rhône river tranquil in the fading colors of the ending day. 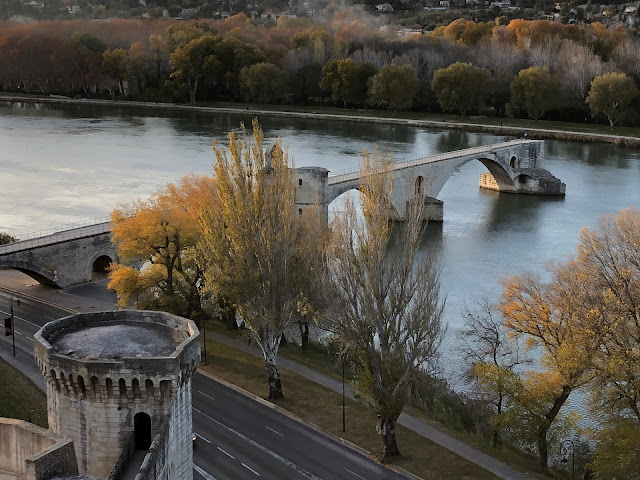 Next day we went to Gordes, which proudly sits on a hill gazing at the brown vineyards below.

A quilt spreads beneath,
sunk in the smoky brown of
winter’s quiet reign
Haiku by my daughter Belisa,12 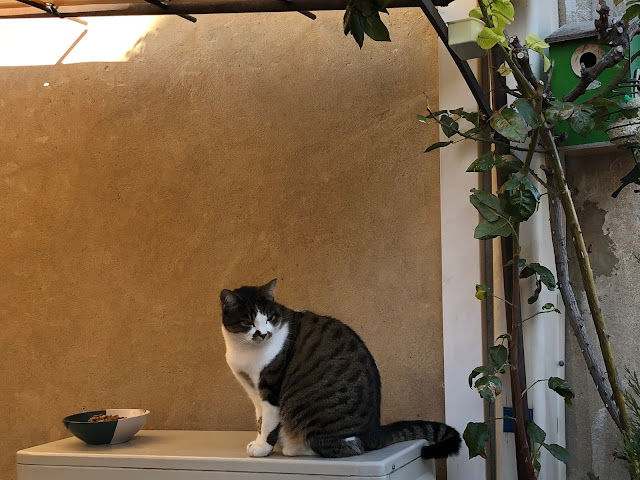 The Sénanque Abbey, lays down quietly next to the town since 1148. The lavenders grown by the monks, are poised in colors of brown, waiting for the summer to bloom. 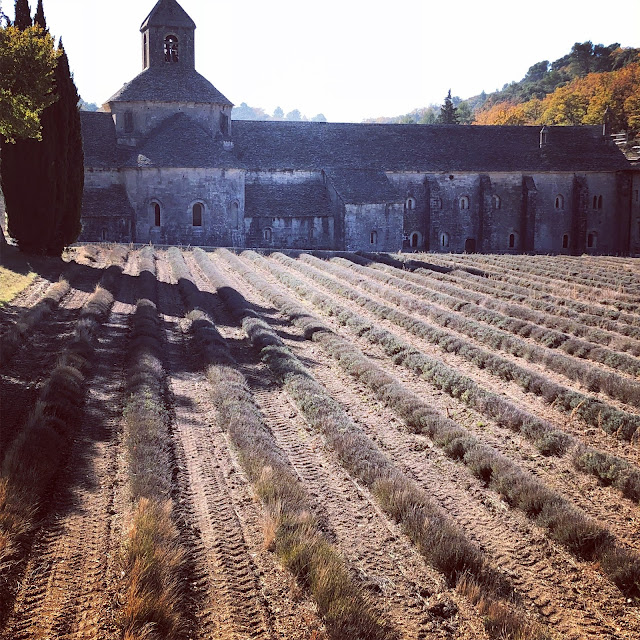 Along the route to Côte d’Azur were vineyards with dark sweet grapes left on the dry brown vines for a reason I could not gather. We arrived in St Tropez later in the day. My daughter and I collected sea glass on the beach under the pale lights of the city. The hotel we stayed in, Hôtel Le Roquebrune in Roquebrune-Cap Martin was a quaint hotel with a dramatic view of the bay from the restaurant’s terrace. 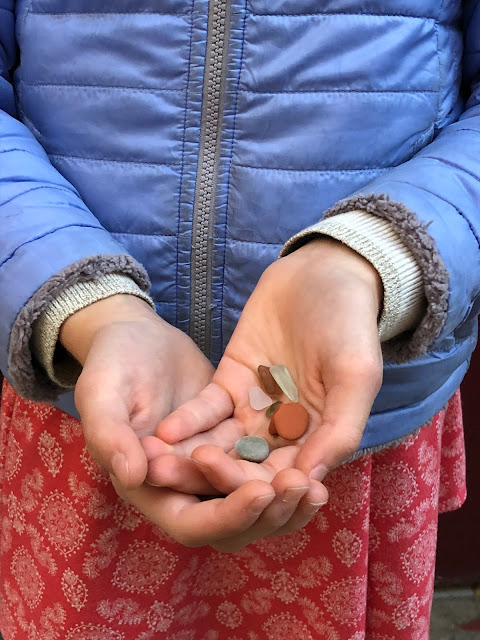 After having breakfast in the nice terrace at the hotel, we visited the small unassuming castle of the Roquebrune-Cap Martin. It was once part of Monaco but had been in French territory since 1861. This is where Prince Albert II was inaugurated in 2006. Its now abandoned rooms looked magical with the Mediterranean sun dancing on its stone walls.
I remember Éze as a hot Mediterranean town with steep cobblestone roads from our honeymoon many years ago.  In November’s coolness it seemed easier to wander around.   Under the yellow shade of a tree we had coffee and raspberries with lavender oil and cream. 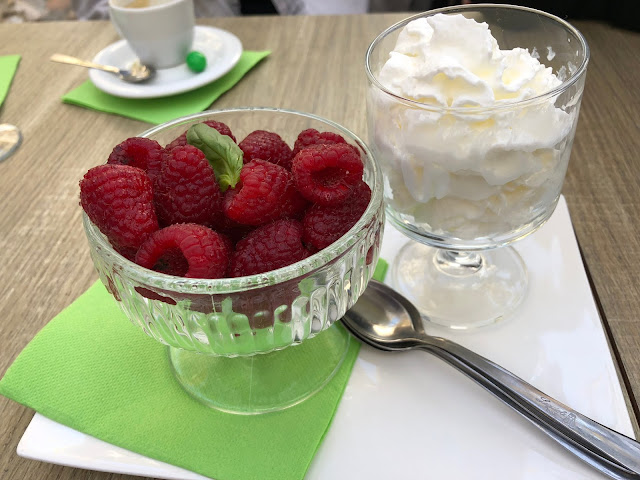 An impressive Roman arch overlooks the city in La Turbie. When Augustus conquered the city he built this large monument. Its narrow streets are paved with stone and brick.

Monte Carlo would not be in my itinerary if it was not for my filial respect to my mother in-law. A superficial town with buildings on top of each other where aging rich women gamble and shop for extravagant Chanel jewelry. 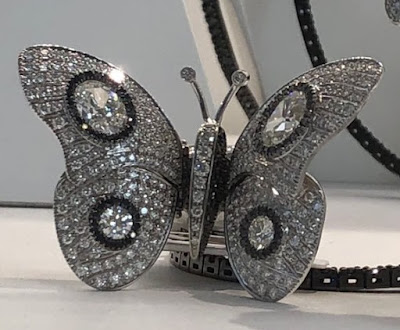 Nice, the city of warm colors of my honeymoon was gay in the evening with butchers, scooter riders and Middle Eastern restaurants. At 8:00 o'clock sharp, stores closed their shutters all at once, leaving cobblestones gloomy in the light of the dim streetlights and destroying our hopes of having one last pastry avec une tasse de thé.


Villefranche-sur-Mer is a small town with dilapidated houses on which the sun dances all day. During our breakfast at a seaside café fishermen came by to sell their fish from the morning.
St Paul de Vence elegantly sits on a hill above the glimmer of vineyards. Modigliani, one of the most charismatic artists had lived here. Town’s sunny cafés, ateliers, and small plazas is pleasant especially with Modigliani’s still tangible presence. The elegance and simplicity of his art is what I seek in my own art as well.

Our final evening in Brussels was filled with nostalgia, beer and Christmas lights.