LIVING WITH THE PAST, POLAND and the CZECH REPUBLIC, 2017


Another family vacation with mothers. To comply with my dearest mother’s wish we went to Poland. We then drove to the Czech Republic. The weather was pleasant in August.

In Warsaw, Plac Zamkowy, is the most vibrant square. It is surrounded by historical townhouses and the Royal Palace. This is where we started in the morning. Later, the night filled square was still vivid with flower sellers. My daughter took this photo of them chatting by their stalls. It seems like a scene from My Fair Lady, doesn't it? 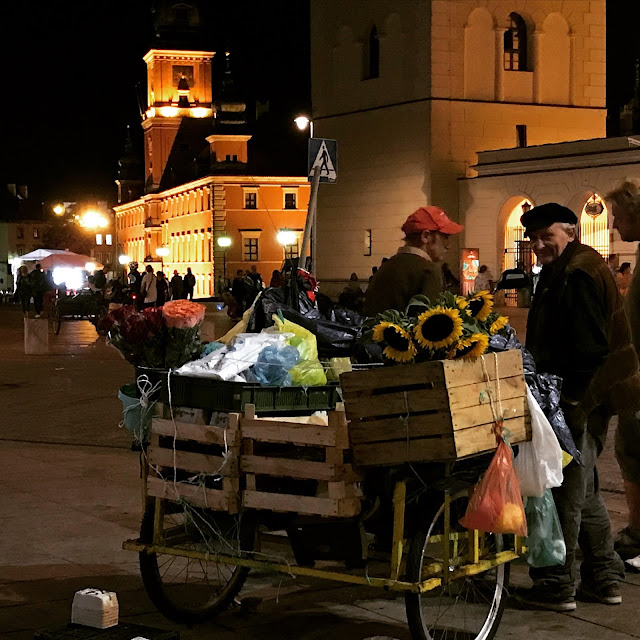 The city was completely destroyed during World War ll.  After the faithful restoration of the old town and a Soviet-style reconstruction it is now a colorful, lively city with post-war photographs poised on streets as reminders of the past. 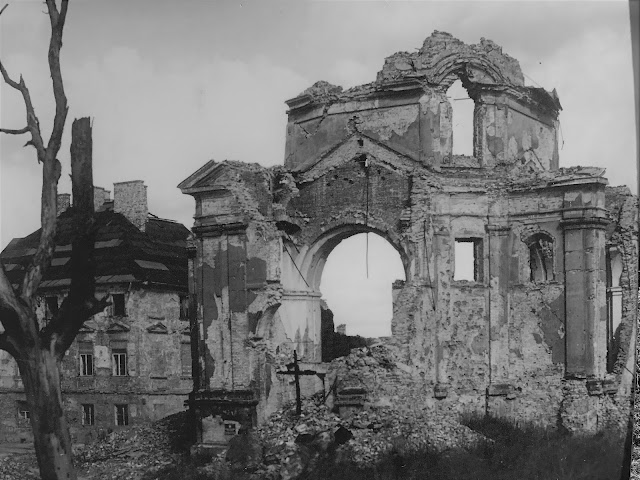 The old town is surrounded by medieval Barbican towers and city walls. 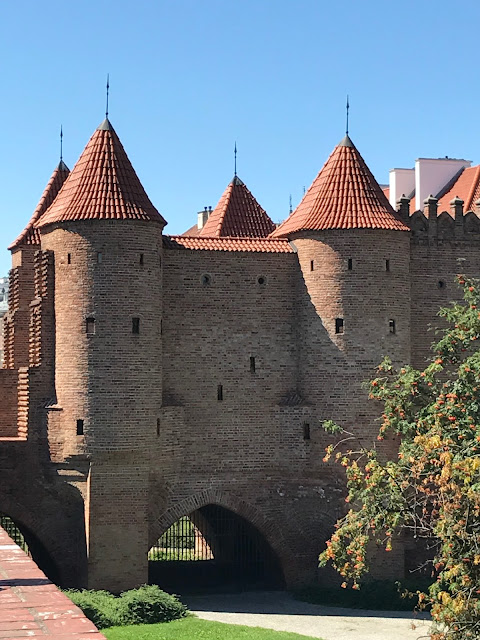 In Starego Miasta, the Old Town Square, pastel colored mannerist townhouses ornamented by drawings of occupations and animal reliefs face a small mermaid statue. A nice gathering place to listen to the accordion and watch the children playing with the fountain. 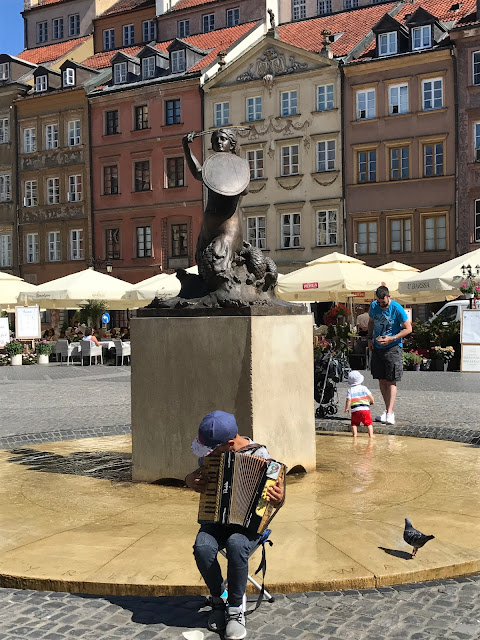 The Royal Castle on Plac Zamkowy built in early Baroque style and decorated with gold clocks, historical paintings and heavy chandeliers, is a delightful representation of the last king Stanislaw August's opulent taste.

Two magnificent Rembrandt paintings are exhibited at one of the lower galleries. "Portrait of a Young Woman" is exquisite and a ghostly image of the painting’s layers is displayed on the back wall. This image gave me an idea for the installation titled "Overwritten Scripts" on Women's Rights. 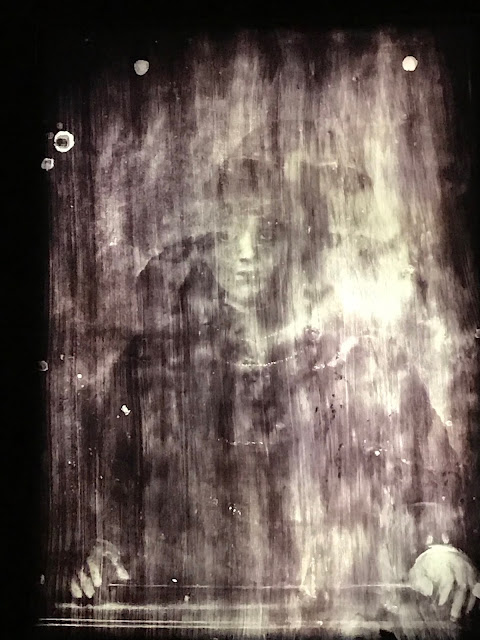 Many little children play musical instruments on the Royal Route along with wool sock makers, and flower sellers. 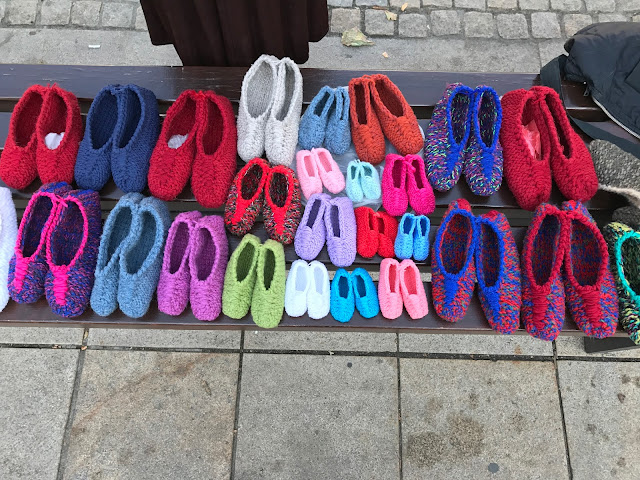 Mid 10th century is when Krakow was first mentioned by a Spanish merchant. Renaissance style had replaced most of the previous centuries' gothic architecture. Only a few gothic churches remain such as the City Hall Tower in the main market square, Rynek Główny. This is one of the largest market squares in Europe lively with accordion players, bubble makers, mute performers and break dancers. 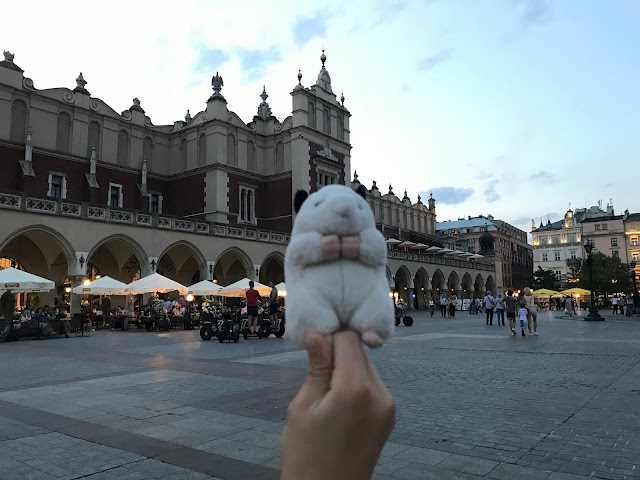 In the center of the square is the Cloth Hall with colorful shops selling wood carved figures, laces and amber jewelry. 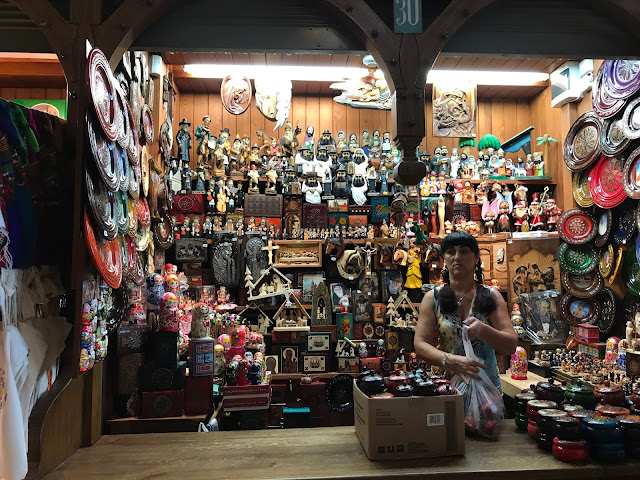 The small Romanesque church, St Wojciech is older than the market square and is one of the most peaceful churches with a small and simple interior. 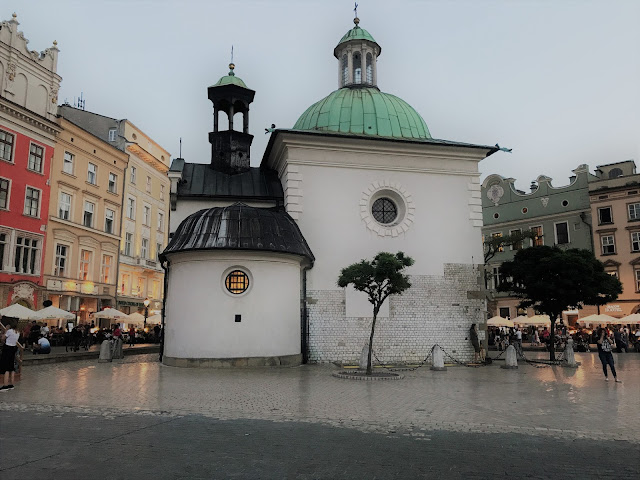 We happened to be there on August 15, the Feast of the Assumption. As part of a celebration of this religious holiday, folk dancers in traditional costumes were performing in the market. 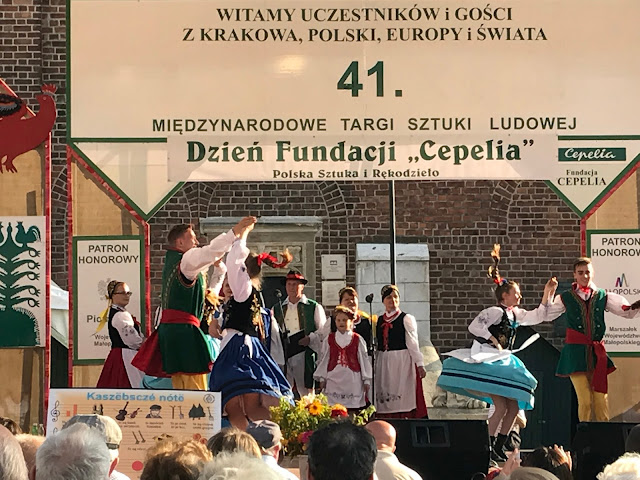 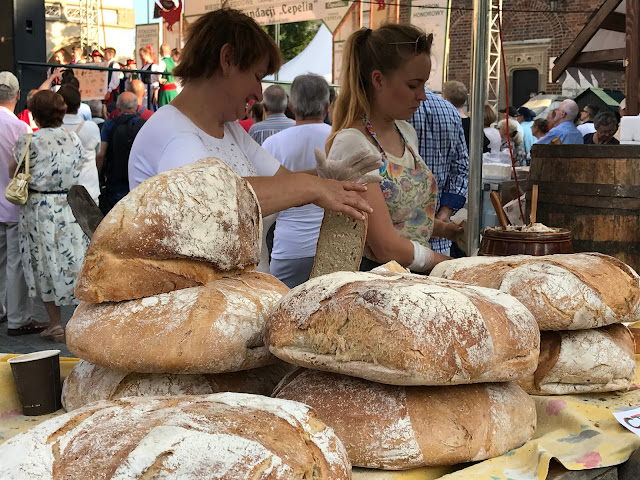 Every hour a trumpet call is played from the top floor of the tall Hejnał Tower in memory of a medieval trumpeter shot while sounding the alarm. The tower accompanies the Church of St Mary, a symbol of Polish architecture. 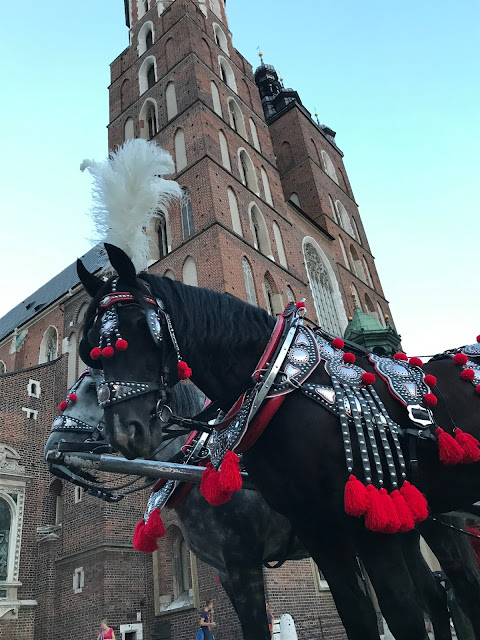 On the Ulica Grodzka street ending in the Wawel, Church of Saints Peter and Paul, one of the most magnificent examples of early Baroque churches, is located. A row of 12 compelling sculptures of apostles from 18th century guard the entrance. 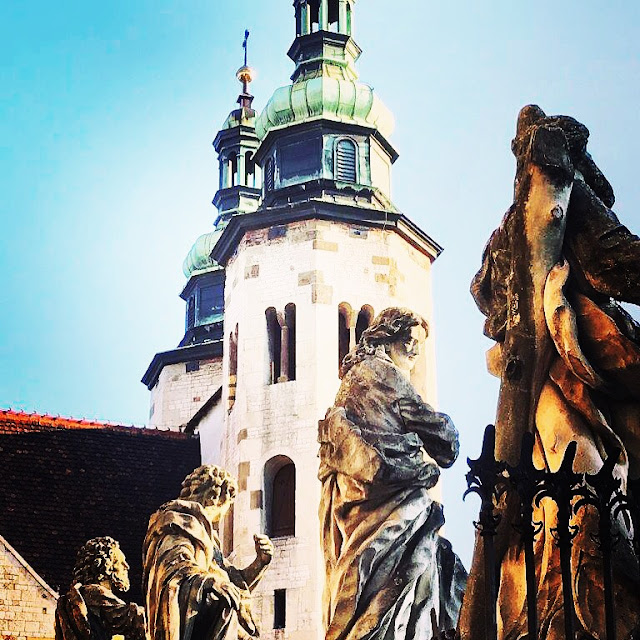 On the Wawel a Renaissance castle and a gothic cathedral overlook the town. 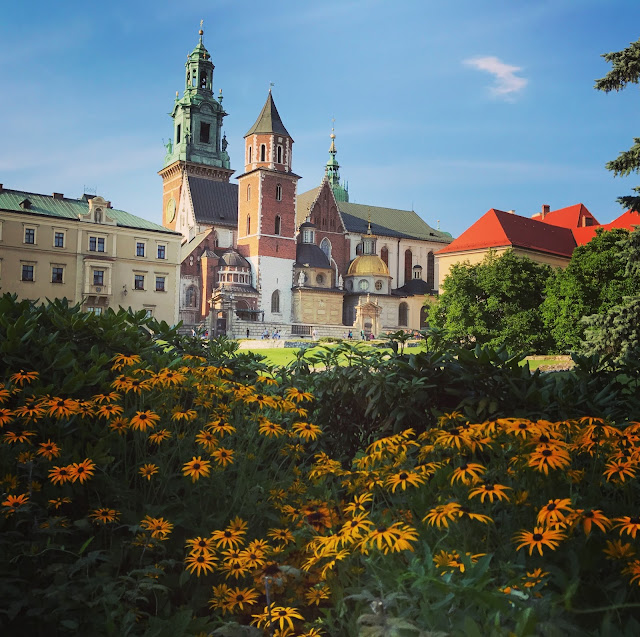 In the Ghetto district the houses are black and the walls that were built to keep Jewish people inside the ghetto are left as a dismal proof of the atrocities of the time. A pharmacy which was a  cover for resistance is quietly standing across from 32 bronze chairs each symbolizing 2000 people who died in Krakow. 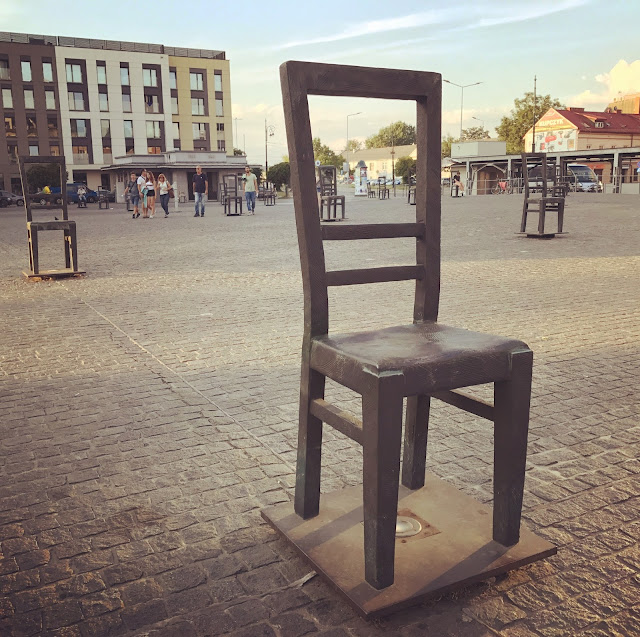 Half an hour drive from Krakow is the 700 year old salt mine, Wieliczka. A walk through corridors with walls of salt rock takes one to galleries, chapels and transparent salt statues and to the underworld to depths of 135m. 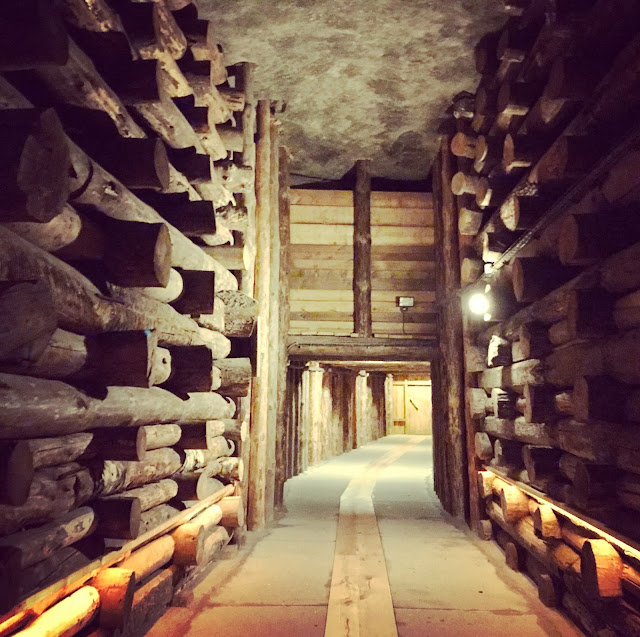 Half way between Krakow and Prague is Olomouc, an unassuming town in North Moravia. A good place to have an ice cream break in the main square called Horní Námestí while watching the wooden proletarian figures of the beautiful 15th century astrological clock moving every 15 minutes. 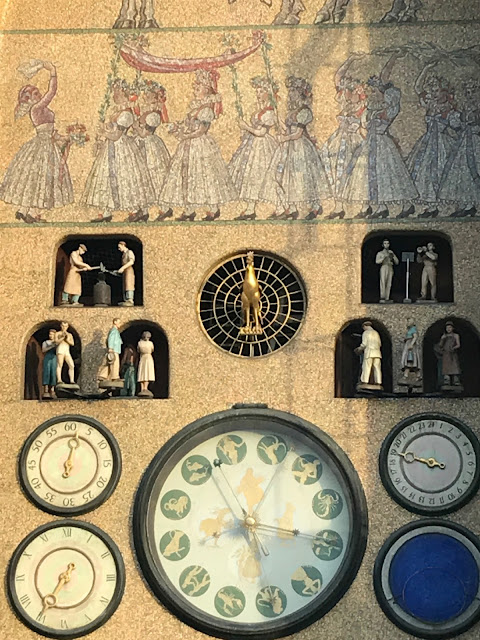 Our next stop was Prague, charming in spite of the large number of tourists and a dazzling sun.  We started early the next day.  The Old Town Square, Staré Mesto, looked beautiful in its quietness. With its smoke colored exterior, Church of Our Lady Before Tyn was gazing at the square from behind lightly colored houses. 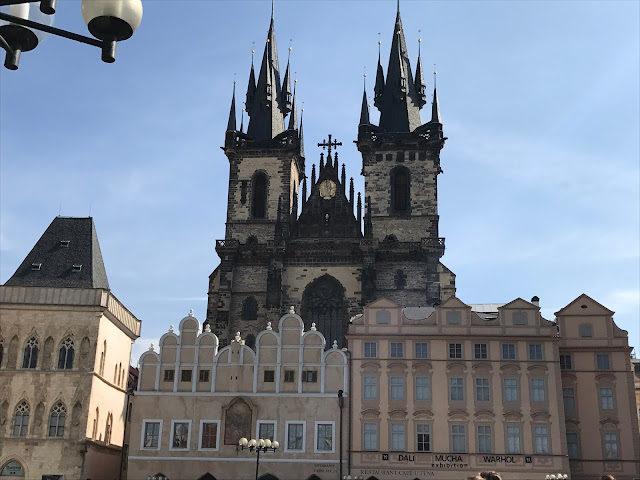 A little way off is the Church of St James with its famous 15th century wooden pieta and Baroque interior of pinks and greens. 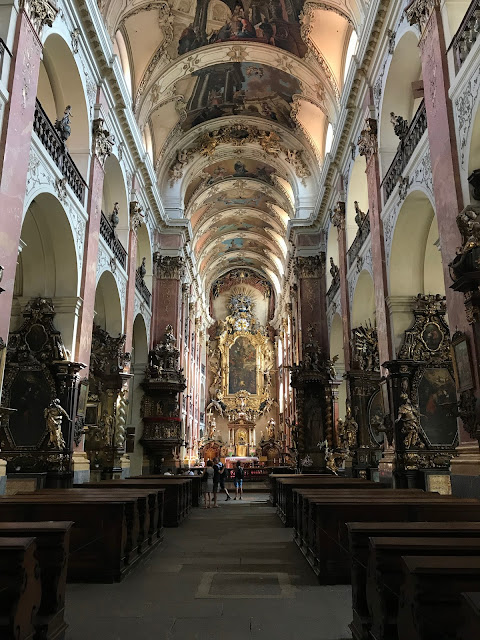 Many years ago we went to a classical concert at a small church in front of the Charles Bridge. My 2.5 year old daughter fell of the chair when she fell a sleep. She looked at us right away rather embarrassed.  Some nostalgia.. 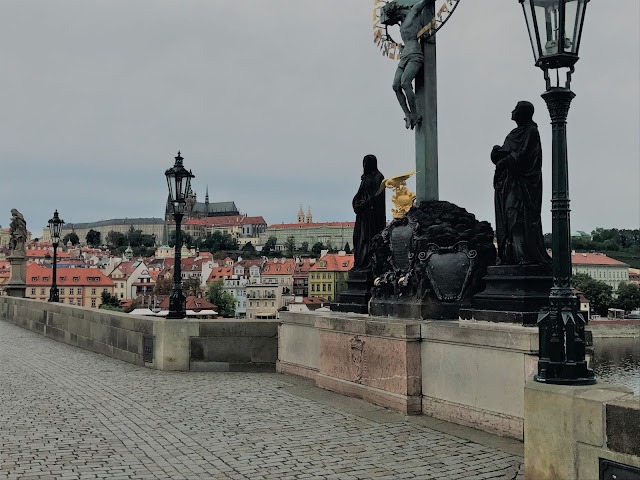 The 14th century bridge with statues of bishops and saints on the Vltava river ends in Hradcany and Malá Srana where an ancient castle on the hill overlooks the city. This is where Prague was founded in the 9th century. 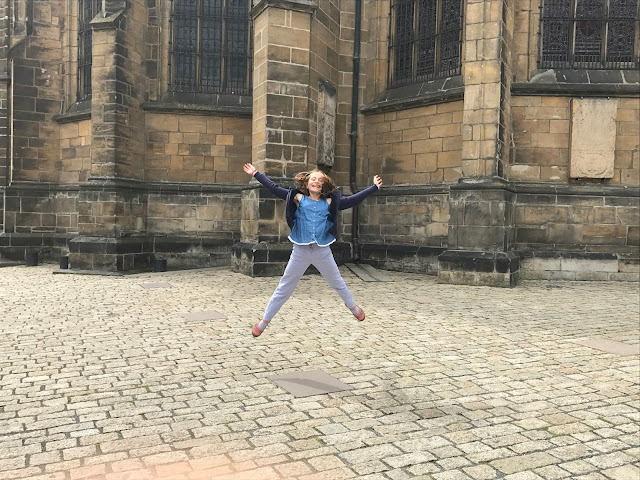 The castle encloses the Old Royal Palace with tall rib vaulted ceilings to allow knights to get in without having to dismount from their horses. 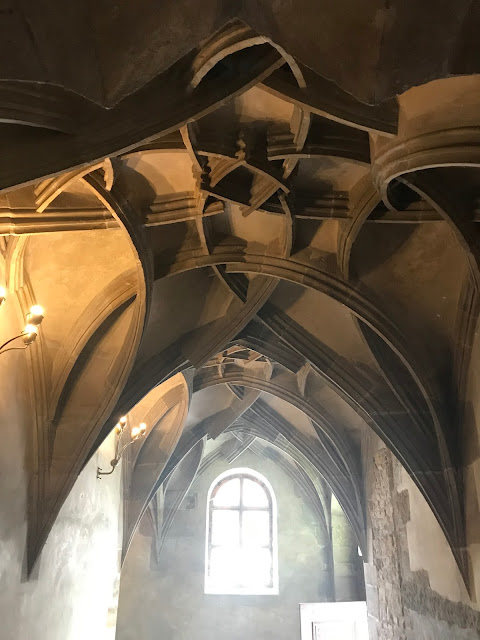 Within the castle is also St George's Convent, a simple structure with remnants of old frescos. 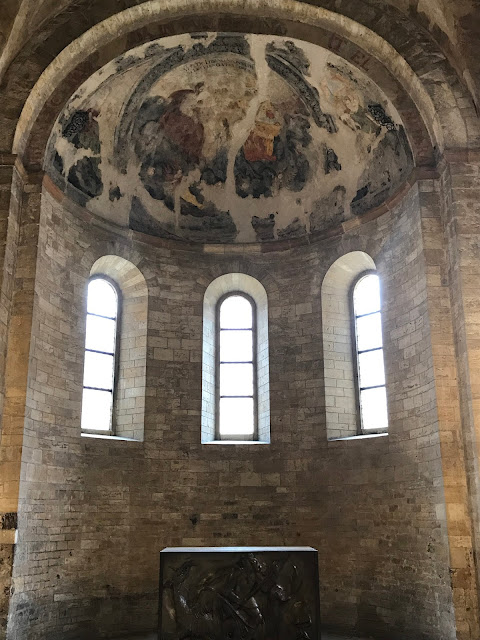 A good way to end the day is to attend an evening a concert in the Art Nouveau style Municipal Building, which is entertaining even though it is intended mainly for tourists.

The Jewish Cemetery and the Maisel Synagogue were for us a good introduction to Judaism. Even though I had many Jewish friends during the time I lived in Turkey I never had the opportunity to see a Synagogue before. Built at the end of the 16th century in Prague Jewish Ghetto, the Maisel Synagogue was elegant with its splendid walls of colors of the night and forests. The cemetery's moss covered tombstones seemed to be unaware of the estimated 100,000 people that are buried here. 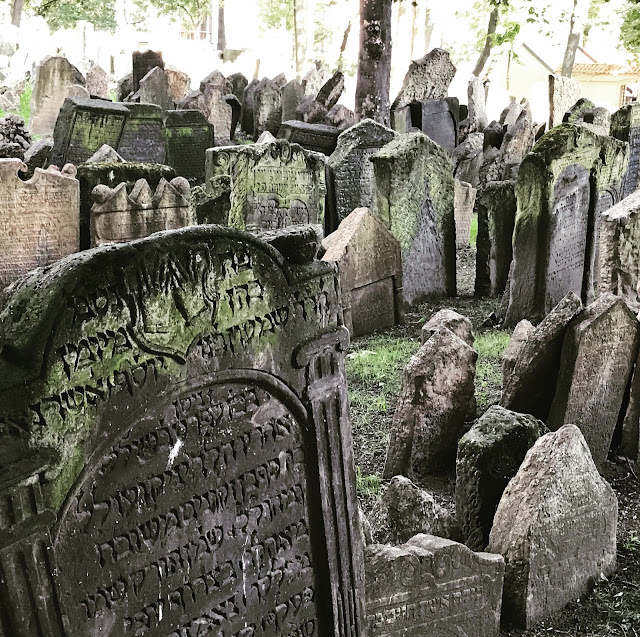 MOROCCO - EXCEPT THE SKIES NOTHING IS THE SAME, 2017